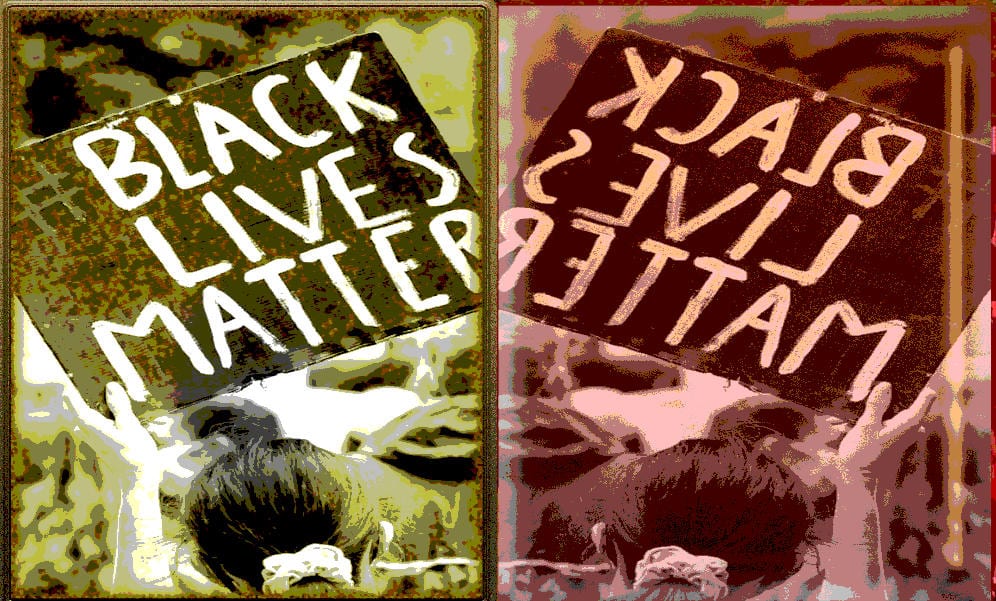 Many people around the world are coming together to protest against white violence against black people. Specifically, for the continued police abuse that originated in the African American community. This is how we got to the BLACK LIVES MATTER movement.

Not everyone is so free

The inequality and oppression against people of dark complexion, black, with afro descent is not something new. It is not a situation that has just begun, it is more, it has been taking place for many decades.

In the United States of America, the land of the free, not all people are so free or sheltered with the same rights. Among the many irregularities, one of the most problematic is the racial issue.

Furthermore, the United States has always projected itself as a world leader in freedom and democracy. But, the truth is completely different. When it comes to race, it has always been on the wrong side of history, and the world has taken notice.

Many people prefer not to remember that the USA has supported racist European colonial regimes. Regimes like apartheid in South Africa until the 1980s, when African-American-led internal pressure pushed him to change course.

Examples of these positions there are thousands. In the national territory itself, in September 1963 Alabama witnessed one of the worst excesses of racism of the time. A time when white terrorists bombarded the 16th Street Baptist Church in Birmingham, killing four young black women.

That same month, near Tuscaloosa, five white men deliberately drove their car to a vehicle where three Ghanaian university students were. They took them to an isolated location, and physically assaulted them with guns, sticks, leather belts, and automotive tools.

So it is important to stop and try to analyze a little about the racial problem in the United States. This problem has manifested itself mainly amongst white people against people of African, Asian, Italian, Polish, Native American, Latin American, and other general immigrant descent.

Let’s start by saying that after the southern states were liberated after the civil war, a variety of laws were established to discriminate against black citizens. This phenomenon occurred during the post-civil war “reconstruction” period.

According to a study between 1830 and 1950, 4,000 blacks were lynched in the United States. Many times they were part of a public and popular show with sometimes thousands of witnesses.

It should be emphasized that racial segregation consists of the separation of different racial groups in daily life, whether in restaurants, cinemas, bathrooms, schools or when buying or renting houses.

The idea was that as long as the opportunities that were granted were equal for both races, this was legal.

Incredibly, racial segregation (in the US) was practiced until the mid-20th century. But this changed after the fight for the Civil Rights Movement in the United States (1954 – 1968 was a fight to demand civil rights and equality before the law especially for black citizens) and the support of President John F. Kennedy and Lyndon Johnson. Exactly, in 1964, the Civil Rights Act was signed, a law that prohibits the unequal application of voter registration requirements and racial segregation in schools, in the workplace and in facilities that serve the general public (“places “) and in 1965 the Voting Law was passed.

Now, let’s jump back in time to the 2000s. Far from the precarious situation of hatred and inequality for African Americans having evolved, it remains and continues more alive than ever.

And, after it seemed that the situation would soon change when they elected Barack Obama, the citizens elected Donald Trump as the nation’s 45th president. What does this mean for racial issues and police abuse? Well, a lot.

Since he was elected, Mr. Trump has done nothing but make inflammatory and provocative comments. He has tried, under every circumstance, to divert attention from the emerging problem.

And, it is obvious that the violence suffered by African-Americans has not been exclusive to Donald Trump’s term in office.

We have several deaths that took place in 2015. These are the cases of Tony Robinson (19 years old, unarmed and shot dead by Matthew Kenny, a 45-year-old Madison police officer), Eric Harris (was fatally shot, Tulsa County Reserve Deputy allegedly mistook his personal weapon, a Smith & Wesson .357 revolver, for a Model X26 Taser. Bates shot Harris in the back when he was on the ground), Walter Scott (was shot to death in North Charleston, South Carolina by Michael Slager. Slager was charged with murder after a video appeared showing him. It showed Scott shooting from behind as Scott fled, contradicting Slager’s report on the incident.)

In 2018, a 21-year-old EJ Bradford was shot three times in the back by an officer from Hoover, Alabama. The incident barely made the news. In 2019, Willie McCoy, a 20-year-old rapper, was shot 55 times by agents in Vallejo, California, while sleeping in his car. In 2020, the bloody riots in the Mississippi prison turned into more than a dozen deaths.

One of the big differences between Obama and Trump is in their responses to heinous events like these. We only have to analyze two moments, two reactions, to see the overwhelming difference.

President Donald Trump threatened military intervention in Minnesota in response to protests after George Floyd’s death in police custody, tweeting, “When the looting begins, the shooting begins“, the latest example of his comments that appear to encourage or support the violence.

On the other hand, Barack Obama, former US president, said in a statement that “It cannot be ‘normal’. If we want our children to grow up in a nation that meets their highest ideals, we can and must be better“. In addition, he said it will fall primarily to Minnesota officials to ensure that Floyd’s death is fully investigated “and that justice is finally done.”

Zimmerman was a member of community policing, saw Martin and reported him to the Sanford Police as a suspect. Several minutes later, there was an altercation and Zimmerman fatally shot Martin in the chest.

The police said that he acted in self-defense, the stand your ground law, a law that establishes a right by which a person can defend himself or others against perceived threats or threats, even to the point of applying lethal force, independently whether it would have been possible to safely withdraw from the situation.

After the national media focused on the incident, Zimmerman was eventually charged and tried, but the jury cleared him of second-degree murder and murder in July 2013.

Trayvon Benjamin Martin’s death was the event behind the creation of the Black Lives Matter movement. The movement started with the use of the hashtag #BlackLivesMatter. This hashtag flooded all social networks.

The movement was founded by three women leaders from the African-American community: Alicia Garza, Patrisse Cullors and Opal Tometi.

Alicia Garza is an Oakland-based organizer, writer, speaker and dreamer of freedom who is currently the Director of Special Projects for the National Alliance of Domestic Workers, the nation’s leading voice for dignity and justice for the millions. of domestic workers in the United States.

Opal Tometi is a New York-based Nigerian-American writer, strategist, and community organizer. She is credited with creating online platforms and initiating the social media strategy during the first few days of the project.

Patrisse Khan-Cullors is an artist, organizer and freedom fighter from Los Angeles, CA. Co-founder of Black Lives Matter and founder of Dignity and Power Now. She is one of the New York Times best-selling authors, a Fulbright Fellow, a popular speaker and winner of the Sydney Peace Prize.

So, Black Lives Matter is a global organization with headquarters in the United States, the United Kingdom and Canada, whose mission is to eradicate white supremacy and build local power to intervene in violence inflicted on black communities by the state and watchmen.

The first nationwide protest took place in August 2014, after Michael Brown died. A “Freedom Caravan” was held in Ferguson, Missouri.

In that first peaceful protest, more than 500 people gathered. After Freddy Gray‘s death in Baltimore, Maryland the protests took on an international character. Just a year later, in 2015, after Freddie Gray died, a 25-year-old in Baltimore Maryland, the protests got much more momentum.

Freddie Gray Jr., was arrested by the Baltimore Police Department and later charged with possessing a knife. While being transported in a police van, Gray fell into a coma and was taken to the Trauma Center. His death was attributed to injuries to his spinal cord.

The medical investigation found that Gray had sustained injuries during transportation in the police van. The medical examiner’s office concluded that Gray’s death could not be considered an accident and was a homicide, because officers did not follow security procedures “through acts of omission.”

An important and massive difference, is that former president Barack Obama commented on the matter Trayvon Benjamin Martin case that  “If I had a son, he’d look like Trayvon,” “When I think about this boy, I think about my own kids.” After that statement, all differences between the responses of both men should not be argued even further, it is crystal clear.

The straw that broke the camel’s back

As if these actions weren’t enough to make people protest on May 25th, 2020, George Floyd an African American citizen died after being arrested by Minneapolis police using a fake $ 20 bill.

On May 26th, the morning after the events, the Minneapolis Police Department wrote that it had physically resisted officers.

The video that captured his death reached every corner of the world. The video showed situations that had never been known. The first is that Floyd’s neck was pressed for almost 9 minutes by Derek Chauvin’s leg. Another thing the video shows is that Floyd did not resist the officers.

The other cruel reality that is evidenced in the video is that Floyd begged for his life over and over again … he was ignored by all the police officers at the scene. What’s more, he repeats 11 times: I can’t breathe! I can’t breathe … after seeing his body without showing signs of life, he was declared dead on arrival at the hospital. The autopsy revealed his death as a result of mechanical suffocation.

This was the straw that broke the camels back. After watching his death on video, as Officer Derek Chauvin pressed on his neck and how unimportant it was to police officers that a man begged for his life, people decided to take to the streets of the United States of America and the entire world.

Chauvin was arrested on May 29th, 2020. Hennepin County attorney, Mike Freeman, charged him with third-degree murder and second-degree manslaughter.

We can’t allow it anymore

In addition, at different points in its history, the United States has unleashed the state machinery against its people. By this I mean water hoses, tear gas, batons, dogs and rubber bullets against civilians to hinder the protest by the civil rights, black anger and activism against violence against blacks.

These are images of police violence that circulate around the world in a matter of minutes.

Little by little, they have repeatedly shown how there is totalitarianism and support for white supremacy in the US’s own backyard. USA

People of African descent have been fighting for their freedom for years. And, in the United States they have struggled against slavery, black codes, Jim Crow laws, the police, imprisonment, some of the highest unemployment rates, constant homelessness, among others.

Every person who has fought for dignity deserves the deepest bow of gratitude. Black Lives Matter has 6 years of constant struggle where black activists and organizers advance towards justice, towards visions, towards a world where families and communities are no longer the sacrifice for a better America, for a better world.

Journey to the navel of the world

An Eternal Romance with Songs

Proud of being latina

Our articles direct in your e-mail, subscribe for more info: